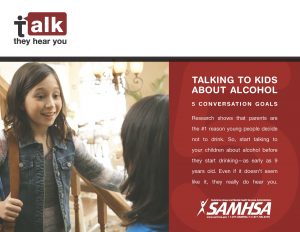 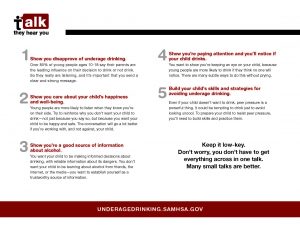 1. Show you disapprove of underage drinking.

More than 80% of young people ages 10-18 say their parents are the leading influence on their decision to drink or not drink. So they really are listening, and it’s important that you send a clear and strong message.

2. Show you care about your child’s happiness and well-being.

3. Show you’re a good source of information about alcohol.

You want to show you’re keeping an eye on your child, because young people are more likely to drink if they think no one will notice. There are many subtle ways to do this without prying.

5. Build your child’s skills and strategies for avoiding underage drinking.

Even if your child doesn’t want to drink, peer pressure is a powerful thing. It could be tempting to drink just to avoid looking uncool. To prepare your child to resist peer pressure, you’ll need to build skills and practice them.

Keep it low-key. Don’t worry, you don’t have to get everything across in one talk. Many small talks are better.

RESOURCES:  Information and PSAs can be found on the website

The “Talk. They Hear You.” campaign aims to reduce underage drinking among youth ages 9 to 15 by providing parents and caregivers with information and resources they need to start addressing the issue of alcohol with their children early.

“Talk. They Hear You.” Application

Practice talking to your kids about the dangers of alcohol.

Watch this quick video to see how the app works (Video: 1:01). (link is external) 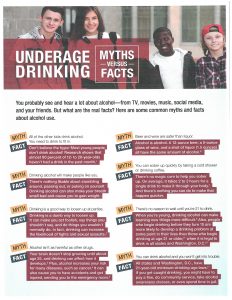 The Substance Abuse and Mental Health Services Administration (SAMHSA) Underage Drinking Prevention National Media Campaign’s (the Campaign’s) goal is to reduce underage drinking among youth ages 9 to 15 by providing their parents and caregivers with the resources they need to properly address this issue with their children early.  The Campaign seeks to:

Underage Drinking Is a Serious Problem

13 percent of 8th graders and 27 percent of 10th graders said that they had consumed alcohol in the month before the survey; and

The Consequences of Underage Drinking Can Be Devastating

Many parents with children between the ages of 9 and 15 know that peer pressure and media influences can often lead to underage drinking.  However, they are not fully aware of the immediate dangers of their children’s alcohol consumption.  Statistics that point to the common nature of underage drinking can be shocking and unbelievable to some parents.  Furthermore, parents often do not feel equipped with the information or resources they need to properly address underage drinking with their children.

The Campaign Seeks to Give Parents Knowledge, Resources, and Confidence

The Campaign will use radio, television, and print public service announcements (PSAs); social media; the Campaign’s website www.underagedrinking.samhsa.gov; partnership networks; and direct outreach to help parents feel more confident when talking to their children about alcohol.  Messages will:

Please forward and pass this along!

RESOURCE: TALK about Under Age Drinking